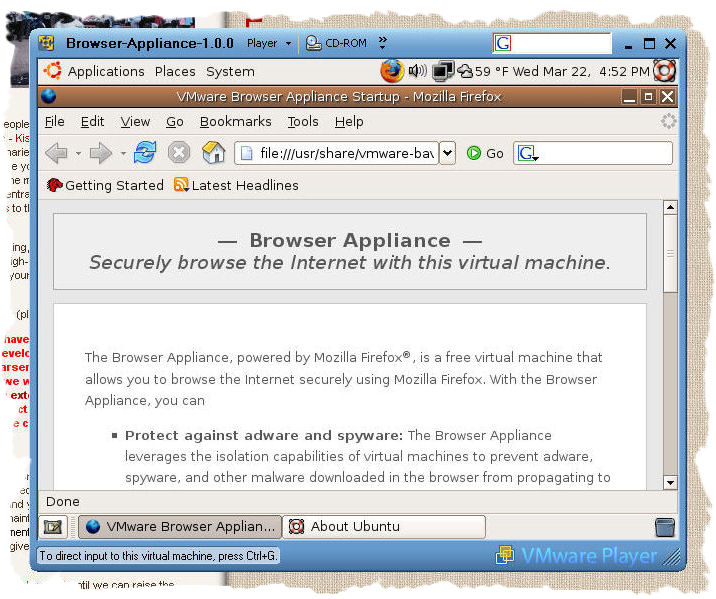 There are those moments in life when you just want to switch operating systems for various reasons. Be it that you want to check your website’s layout under a different OS & browser; maybe you just want to access a few pages on the internet from a much more secure plattform; maybe you need to share a computer via a remote access connection; or maybe you’ve just always wanted to use a fancy Linux distribution such as Ubuntu and you are such a lazy bone that you don’t want to install it or even only use the live cd which would enable a complete Ubuntu environment running directly from your system’s RAM & CD-ROM drive. Yani, the computer would be required to restart and we don’t want that. All we want to have is instant access to another plattform/system/operating system – another "virtual" machine.

VMWare Inc., the makers of VMWare®, provided the player you see in the screenshot above – and all I am doing here is running a special Linux distribution of Ubuntu right from my WinXP environment. Imagine, two operating systems running on my (rather old) AMD XP 2000+ desktop pc at the same time! I think that’s pretty cool, also, the argument of "niiaaa…this xyz piece of software doesn’t run on Linux ‘nway so I’ll stick to WinXP" doesn’t count anymore because why worry if you can switch systems at the touch of a button?

Want to try it out? You’ll need the VMWare player and (e.g.) this Ubuntu distribution. Enjoy :-)