The beauty of politics in Germany these days is that apparently almost all so-called leaders didn’t like the election results from last September 18th. Germany is on its way into a big coalition between the Soccer Democrazy Party (SPD) and the Corrupt Demon Union (CDU) and since there’s a LOT of money to be saved in future, no one likes to be responsible for it. Hence, many elected leaders retired (Schröder, Fischer, Müntefering, etc), some just keep on playing games (äähh-Stoiber) while other are just too dumb to realize what’s good and bad (Merkel). Can you imagine the irony when election campaigns are focused on personalities while in the end, none of those elected had the guts to endure? 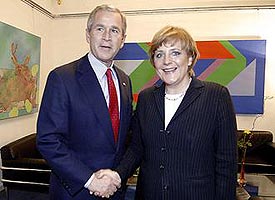 Either way this sort of free entertainment "Made in Berlin" still makes up for some great satire and maybe we’re not talking oranges or bananas over here (like in Kenya) but instead, it seems to be a battle between potatoes and cabbages. And I just wanted to note down that women are becoming stronger these days (which is good!) but then I thought of Mrs Merkel and asked myself: wot kaind of Thatcher iss zaehd? Gakunywo kagîra thooko….

One thought on “oranges and bananas in Gamaanii”