I was really wondering about blogging this, but here ya go:
A good friend of mine, Lady Kikuyumbuzi, had this crazy idea of climbing Mt.Kenya. Having a great ability to assert herself, she quickly persuaded some other volunteers (read: unaware interns) to accompany her on this quest of climbing the highest mountain in Kenya. 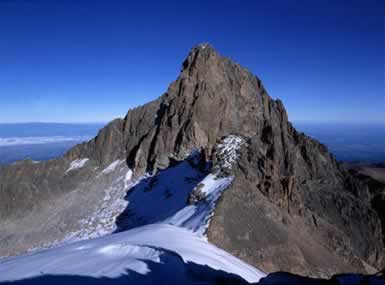 I never had any doubts that she’d do that one day when she told me, but, to be honest, I never really expected her to do it this early. She dropped me a few lines from Nairobi on saturday and wrote: “yeah, and btw, I’ll be climbing Mt.Kenya on Monday…..and there’s this other appointment I’m having like at the end of the week”. Yeah….
CAN YOU IMAGINE why I adore her that much?!

So I am sitting here in my warm and comfy room in Germany and thinking to myself: Well, I can’t be in Kenya right now due to other obligations, but my thoughts (and prayers!) are with her anyways so maybe….maybe I’ll just start another Google Earth session and have a closer look at the slopes of Mount Kenya. Maybe somewhere between Bwana Whispers shambas I’ll find a little Mzungugoat holding up a sign that says: “Hello Bw Kikuyumoja, me I am here. Sound and safe”.

I think it started way back in 1982 (?) after the AirForce coup when the Moi-regime banned all detailed maps of Kenya. Before, I was told, you could get the most detailed maps of Kenya (YES, those ones with contour lines!) and after that ….well, we apparently all know what those city maps of Nairobi looked like during the 1990s. They were just cut down to a minimum and rendered useless for real Safari needs…

Now, imagine this lack of proper maps and try to think of it in GoogleEarth. And it doesn’t even matter if you’re in Kenya or Germany – small Kijijis like Naro Moru or Suderburg (which is where I study – boys, this place is SO lost!) are not indicated on the map. In fact, those ignorants over at GoogleEarth HQ (a.k.a. Keyhole.com) apparently lost the key to the room that contains all those juicy, detailed maps that would show us our beloved Nairobi in its full beauty.

The Internet community though, being as resourceful as a kenyan fundi, quickly came up with a working solution. Why wait for more zoomable maps at higher resolutions if you can have real pictures taken at ground level and overlayered into GoogleEarth’s maps?! This useful Flickr plug-in for instance, which shows the closests 50 images posted on Flickr (based on your current viewing area). Of course it’s just a few pictures now, but as communities grow, more and more images on Flickr & other web resources will hopefully become connected to placemarks on GoogleEarth. This GoogleEarth Bubudiu isn’t just a great toy – it’s a new way of marketing locations. And Kenya being a preferred tourist location, why not promoting it through Google Earth? (Which of course reminds me of EduVision’s eSlates project at this point and adding a tourist functionality to the programme where they give out PDAs to tourists (with some futuristic “GoogleEarth for PDA” installed) and clickable maps…”Oh, yes, we’ve already marked our route on the PDA”. Or somethin’…)

Yani, this all goes to show that I might not be able to actually put my feet on the slopes at this very moment, but at least I can have a closer look upon the route Lady Kikuyumbuzi is taking and….I guess upon reading this blog entry once she returns, she’ll probably never talk to me again. Why? Well…remember Whisper’s wife Thatcher? Haia….go figure…