How much would you spend on having the ability to take a shower in the Central Business District?

I was just going through Ken Banks’ flickr stream when I stumbled upon these two mobile recharging stations which I had seen earlier (it’s up since ~2 years) but only now I just realized that SOMEONE urgently needs to convert this into an AfriGadget/-Biashara and combine it with lockers for e.g. shoes and other facilities. 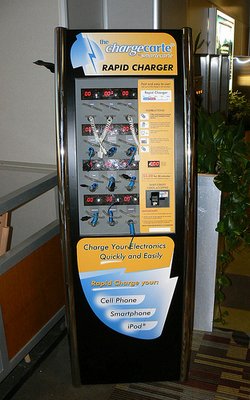 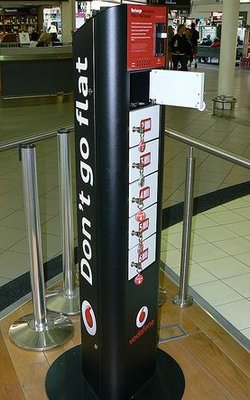 Those of you who have been to cities like Nairobi know that a lot of people actually carry two pairs of shoes around – one for the road and one for the office. While working in Nbo, I often wondered why there are almost no public lockers available downtown that could be rented and used by commuters to deposit stuff they usually carry to the city on a daily basis for the lack of secure alternatives. Yes, there are some alternatives available, but these are(afaik) often only connected to supermarkets which means no 24h/7/365 availability of such services.

While these mobile recharging towers may work in the UK or the US in such secured places (like airports), I am wondering if this would also work in Nairobi if someone invests some money on a mobile charging cubicle with extra lockers for shoes and other office clothes, maybe also additionally secured by a watchman or someone running a kiosk.

For some reasons, David Kuria’s ecotact.org website is unfortunately offline right now (so I can’t really show you what I am talking about), but it would be nice to have much more Ikotoilets all over Nairobi. While I believe that ecological sanitation projects always require a demand for fertilizers from farmers in semi-urban areas, the Ikotoilet as a 50% ecosan toilet could be one of those ideal locations for such storage facilities.

After all, it’s nice that consumers can buy airtime credit almost everywhere in the country, but there are hardly any places – even in cities – where one can take a shower after work, have a decent nature’s call or even use extra services like such lockers and mobile chargers.

There obviously is a great demand for such services / facilities – but how much would you be willing to spend on it as a customer and what’s the ROI rate for potential investors? I hope to find some answers to these questions one day…