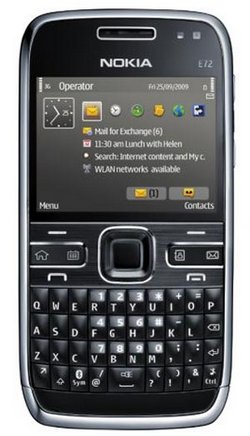 I am waiting for the Nokia E72 (phone) since it was first mentioned about a year ago (!) and then officially announced in June (July?) this year. It’s a successor to the very popular Nokia E71 which I had reviewed back then and features a nifty 5mpx cmos camera and a keyboard similar to the one currently found on the Nokia E63.

One of the best ways for staying up-to-date on product launches is Twitter Search. I’m scanning Twitter for E72 related news for quite some time now and I can tell you that many ppl are desperately waiting for the E72 to hit the market. I heard it will be October 6th or 12th…

The Nokia E63 itself is a very nice phone – I actually prefer its keyboard over to the initial E71 and so I am really glad that the E72 will not only have such a similar keyboard, but also come with a camera that will be able to compete with the really decent 5mpx cam on my Nokia N95.

My N95 is 27 months old now and – compared to other phones I’ve owned in the past – a bit worn out. The other day I also dropped it on the floor and it fortunately still does the job, only a few scratches on the (exchangable) cover. Back then I urgently wanted to get my hands on the N95, only to quickly realize that it has a “prototype” design and comes with other flaws I’ve mentioned on this blog in the past. Another problem with buying brandnew phones is that a stable firmware (~ the operating system on the phone) will probably only be released after a year. This isn’t a Nokia-only problem though, others like Apple have experienced similar issues.

The interesting part on this next purchase will be the question if I should get it like my N95 – with a 24month contract and a subsidized phone – or directly buy it without a contract and paying the full price.

The pre-order price for the phone currently is around EUR 360 and I am expecting this to change over the next coming weeks. Also, I think the current trend is that less phones are being subsidized these days and that mobile network operators and their resellers started leasing out phones, so you end up paying a hefty monthly fee + ~ EUR 15 for the phone. You’ll still find many customers asking for “a free phone” from their operator every two years (the way it has been in the past), but it is actually cheaper to get a prepaid card & buy the phone (unless of course you’re on a flat fee contract and using the phone a lot). I don’t call that much, but often check my mail via the phone, so “cheap internet access” is my main issue. I also like the browser on the iPhone, but then: I guess I am too stupid for Apple’s Monoculture and Operating System. The iPhone may have a great browser (the greatest?), but a non-removable battery, a lousy camera and no taskmanager (or is there?) are a no-go for me. Plus it is still too expensive in Europe.

I really can’t wait to get my hands on my own Nokia E72 because it will eventually enable me to return to the monoblock design. The 2-way sliders on the N95 are *interesting* but absolutely useless and it’s about time for me to upgrade from a T9 keypad to a full QWERTY (QWERTZ) keyboard.

The 2 best reviews so far are the one by Antoine of AllAboutSymbian AllAboutNokia (part 1,2,3,4,5 and his verdict) and Eldar’s piece on Mobile Review. These two reviews are also reason enough why I just want to own the phone and won’t do a review on it once it’s here.. :-)

OH, and it HAS A FLASHLIGHT!