Back in 1998 when a group of two friends and I applied for venture capital for a smart mobile phone-related web project*, we were told that VCs in the US would normally finance 100 projects and call it a success if 10 out of 100 would take off. Contrary to that, this “success rate” was considered bad in Germany where the aim was to only finance 10 projects at the same time and then try to see that at least 7-8 of them take off.

I had a professor at university who was given many important international awards, even some under the Bush-administration – but at home his fellow colleagues made fun of him whenever he wasn’t around. Working as a member of the faculty council and being his student, I often had to defend his unordinary actions because his fellow colleagues never understood his scope of work and genius mind.

Talking about taking financial risks, my impression is that there’s a different culture in the US that almost pushes people forward and provides them with some financial backup to put their ideas in place. Not so in Europe, where you will either have to convince as a person & your reputation or have a very very tight business plan & idea of what you’re going to do. Meaning, the willingness to carry a risk is so much higher in the US than in Europe. I may be wrong on this, but that’s my impression so far.

Take the US election campaigns, for instance. With the involvement of the new media channels and blogosphere, the individual is approached at his point of interest and guided into a wonderland full of emotions, nationalism/honour and some private tidbits of the candidates.

Whenever I watch these campaign videos online, I think: well – would this work in Germany? Would such emotional campaigns also work in Europe?

Yes. Voters wouldn’t be used to that, but the majority is the same all over the world and that’s why I think what makes a strong leader isn’t lipstick, but a positive charisma that may be sold to the masses.

I am a sceptic 1/2German who does not believe the hype, but at the same time I so often wish my fellow countrymen would at least sometimes be more open to new ideas, take more risks and ease up some bureaucratic processes.

I tried to follow the BarCampAfrica event last night that took place at Google’s Mountain View Headquarters in the US, with streaming & recorded video sessions from Kenya, SA, Nigeria and Ghana. A quite interesting networking event. From what I heard during the panel discussions, I can only assume that the Ayittey/Shikwati approach of “less help, more trade” still needs to reach even more open minds in the US and elsewhere, and that there are indeed some countries on the African continent that are already capable of providing IT work. 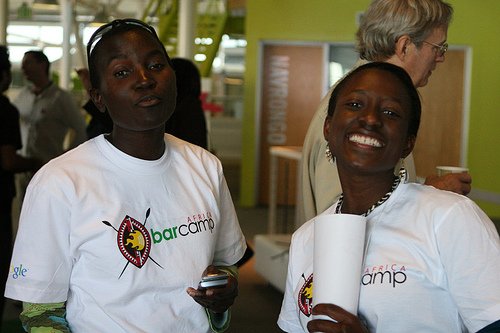 This is exactly why I endorsed the BarCampAfrica actually taking place in the US – to reach those who still need to understand that we’re not (only) talking about water pumps, proper sanitation, food security or health issues, but instead about Africa as a market. I strongly believe that the creation of such business opportunities is the only way forward as all other approaches aren’t sustainable enough.

I am currently in the process of writing my diploma thesis (Dipl-Ing.) on “sanitation as a business in Africa”, and the basic concept is to promote (public) sanitation facilities as a business and combine that with a reuse concept. A reuse of nutrients contained within the different waste streams.

So, even though I am coming from this green/environmental engineering background, I do not follow the “…Africans need proper watsan/food/health supply before anything else”-approach. Instead, I believe that even such fundamental issues will be resolved by proper markets – not because they represent such a fair system, but because they do work and are sustainable. You may not agree on this, but then pls show me a sustainable project that has been build up with outside help and has grown into a full business.

Next we’ll need to have such a BarCampAfrica event in Europe. The only similar events I’ve seen so far were invitations on behalf of a local Chamber of Commerce that invited some permanent secretaries from African nations and key investors from Europe – where the aim clearly was to attract investment in Africa and to create a network of potential investors who would pressure local governments on opening up their trade policies. A BarCamp is different as everyone is free to join. And that’s exactly the spirit I’d like to see in Europe much more often. Take the risk, meet new people, share your ideas (for a better world, *cough cough*) and feel the “Yes we can” spirit. After all, most of the now much celebrated Web 2.0 projects started off as small 3day hacks – so even small ideas have the potential to work out and prosper.

The video transmissions via ustream.tv at one point later in the night broke off, but conversations continued on Twitter & Co. even until Sunday, so I take it that the BarCampAfrica was a real success – and much needed.

*mobile phone project: a WAP-based dictionary that would also have an sms-based frontend.

One thought on “the difference & BarCampAfrica”