So today is World Envi­ron­ment Day and I had actual­ly pla­ned not to cover this spe­cial day as I am dealing with envi­ron­men­tal issu­es almost every day and would actual­ly have to blog on it every day then. Just simi­lar to what World Water Day means to me (not much as a *spe­cial occa­si­on* from my very own pov, that is).

Howe­ver, as I went for lunch with my col­leagues today, we found the fol­lowing flyer(s?) on our tables and I instant­ly thought: hey, i’ve got­ta blog this. .. 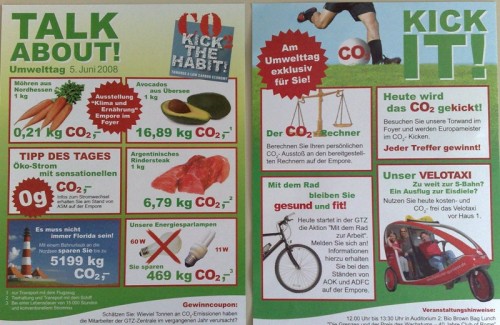 No, serious­ly, World Envi­ron­ment Day is here to remind all of us that envi­ron­men­tal pro­tec­tion starts with our own envi­ron­men­tal awa­reness and that we can not just sit back and wait for some Mes­siah to come and give us a working solu­ti­on. Rethink your actu­al beha­viour and iden­ti­fy the potential.
(And this, alt­hough I am a strong defen­der of the Braungart/McDonough theo­ry, e.g. how nice it would be to have a 2nd — green — indus­tri­al revo­lu­ti­on whe­re the reduc­tion of *bad beha­viour* isn’t a solu­ti­on (= con­suming less is still harm­ful), but ins­tead iden­ti­fy­ing and using mate­ri­als who­se bio­lo­gi­cal and tech­ni­cal nut­ri­ents remain in an loop. Eco­san is one of such approaches.…but tha­t’s ano­t­her story :-).