Some years ago, I think it was in 2000, I traded in an older Nikon F2 with a 50mm lens into a Nikon F70 – both being single-lens reflex cameras. I went for the Nikon range because a) i wanted to use some older lenses we had acquired in Japan during the 1980s and b) I’d first gone for a Canon model but didnt like its weight. There’s a much better grip on the F70 and with a decent 28-105mm lens, it wasn’t as top-heavy as the Canon. 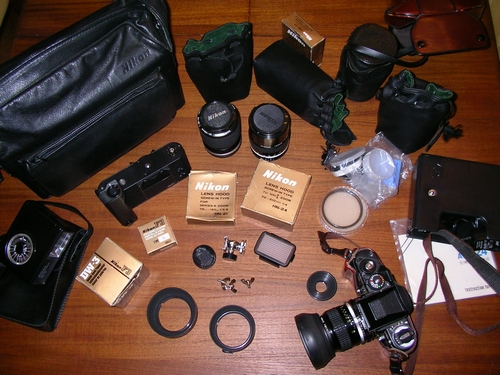 a Nikon F3 with an MD-4 motor-drive, some lenses, filters & bags

Needless to say that my F70 is still almost in mint condition – contrary to Cgzed or CG, I am too lazy for carrying such a huge camera around with me. I guess I’ll keep it for a very very very long time now…

Then came the digital age and my first digital camera was a Casio QV-100 I had managed to obtain for a relatively low price in 1998. Picture wise it came close to what low-budget webcams are capable of doing these days (or even worse) although it came with a CCD chip (instead of a CMOS chip). Battery consumption on this machine was horrible and just one day it went into early retirement. Although I couldnt get it back to life, I had managed to still sell it on eBay. Nice! 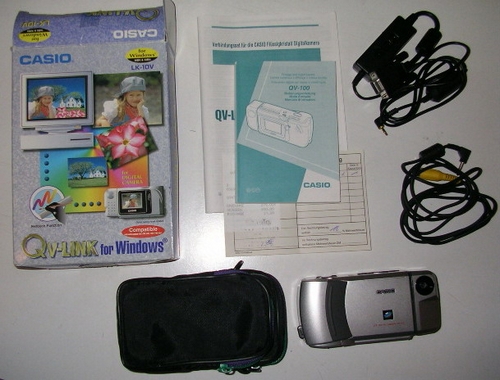 Next cam that followed was another low budget solution: Mustek gSmart Mini – which only advantage was the limited size. And you could use it as a webcam, which was pretty cool – back then. This little cam was later on inherited to a member of my extended family.

I think the best part about these cams came when I disassembled them – similar to what this guy did.

Years passed on and nothing happened. Then, during winter 2003, digital cameras started to flood the market. Mama Xmas gave me the hint that I’d have the choice between a bigger bed and a better camera. “You decide what you want, JKE”, she said. “I’ll help you kununua a bigger bed, or you’ll save it and get a camera”. Hmm. A bigged bed? What for? My bed was already 90cm wide and 200cm long – what would I need a bigged bed for? Don’t you know that nerds often sleep alone? …Well, I ended up going for a better camera (and later on inherited a bigger bed from my bro-in-law ;-) => Sanyo Xacti J1, 3Mpx with an internal lens which provides a 2cm macro mode . Awesome! 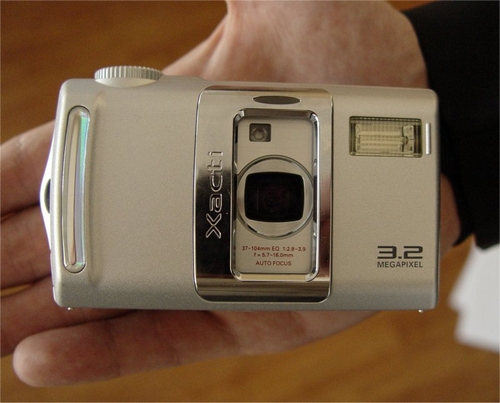 Sanyo Xacti J1 (not my hand)

The Sanyo J1 is still in use and I’ve often thought about buying a better point&shoot cam, maybe a 7,1*mpx “low-budget” (aka beginners) cam with some more features. Or rather go for a Nikon D40(x)? Of course, Hash will argue that the D50 is a much better deal, but then: unless you have a family and a baby buggy to carry around, there’s no way for me to carry a bulky camera around with me. PLUS: i am way too broke to seriously think about buying just another camera.

There are so many good cameras out there and so many talented photographers. Ok, maybe some of these ppl photoshop their results before uploading them to Flickr & Ipernity, but still: with todays advanced cameras, you basically only require some decent light and the right angle to take a picture. Of course it makes sense to invest into proper equipment, but if you’re as lazy & broke as I am, something like the autofocus 5mpx cam (based on a CMOS sensor) in my Nokia N95 will have to do. Also, it competes with other 3,2mpx cameraphones (N73, SE K800i) and is a real progress to what I had used before, and especially in Kenya: my Nokia 6230(i), which came with a nice & quick CMOS chip. Alas, if you need to take a quick pic without much ado, the Nokia 6230i is still the best cameraphone for that purpose. In fact, it was more fun taking snapshots with my 6230i than it is right now with the N95. But then – I am using the N95 as a real camera substitute, and not for snapshots only.

I’ve now lived with the N95 and its cam for the last 1,2,3….9 months and have taken most of my photos with this cameraphone. Why? Because it’s just around when I need it. Simple. 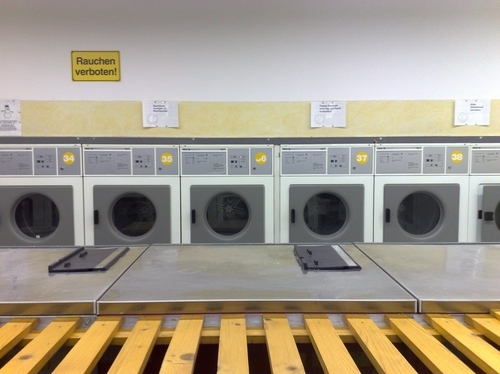 …and this picture is even geotagged!

I am not such a good photographer and so I actually don’t even have to worry about better equipment (as i does NOT depend on the right equipment + i’d be happy if i could get rid of the inherited F3 equipment above which has only been kept due to sentimental reasons + the bad market situation), but my aim right now is to see what’s possible with a relatively bad camera / good cameraphone. What kind of picture quality is this cameraphone capable of?

For a start, check out this Nokia N95 user group on flickr.