Did you know you can include an image of the album covers of your (ripped) music cds within the ID3 tag of an mp3 file?

It started two years ago, when I was given this 30GB mp3 player – only to quickly realize that around 3/4 of all my mp3 files did not have proper ID3 tags and thus only appeared under the “unknown artist” category on my mp3 player. This of course depends on the player, and while some are capable of reading this basic information from the file name, others rely on the ID3 tag of each music file to identify the artist, album name, title, track and so on. 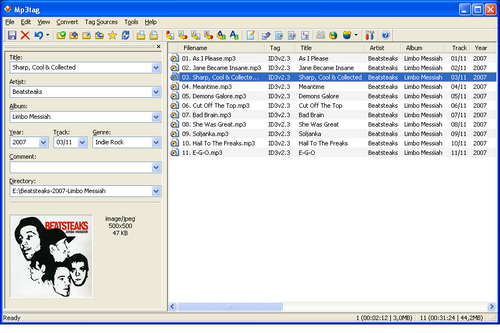 Maybe I am a bit old-fashioned – but which player & music software are YOU using to listen to your music collection on your computer?
That is, I dont like iTunes and even Winamp has started to suck. These progs take ages to load and sometimes even mess up my mp3 collection. I’ve been using foobar2000 for some time now and am quite happy with it. A fast & slim player that instantly loads on this WinXP machine. Oh, and it also scrobbles my tracks to last.fm, so what else could I ask for? Album art isn’t shown on foobar2000, ok, but beautifully displays on my mobile phone’s player.

Reason for mentioning this: I like it how the mp3 format has so many options for saving meta data. I wish the same usabililty, with which ID3 tags are supported by various players & displays, could also be used for implementing metadata into image files. There’s this utility I tested the other day which writes tags right into an image file (*.jpeg, *.gif, etc.), but it wasn’t that stable (there’s a much more stable build available now). Pandorado also seems to be an interesting alternative I’ll still have to test.

There are (at least) 3 completely different approaches for storing image metadata:

These 3 approaches are not compatible with each other. (src)

I wonder why this approach to implement metadata via IPTC isn’t pushed any further? I mean, even iPods only store any metadata within an extra file and not within the music or image files. Metadata needs to be stored within a file – and not in an extra file. Imagine an online photo management site like flickr which automatically sets up titles and descriptions based on metadata directly from an image file. Hmmm….so who’s already using this?