A friend of mine forwarded this article from Der Spiegel Online to me which talks about Nivio.com, a new start-up that offers a remote, virtual Windows Desktop to its users.
I haven’t tested this so far, but according to the website, there’s a trial periode of 30 days and then it costs US-$ 12,99 / month. The virtual desktop is supposed to come with Windows XP, 5 GB space and a bunch of commercial and open free software. 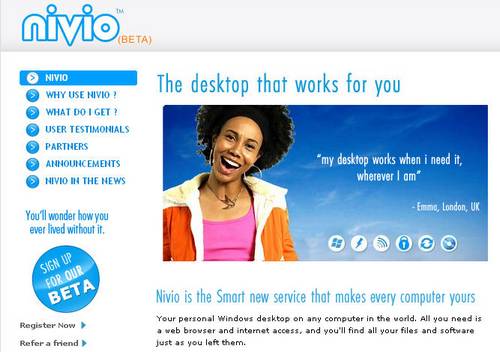 While I appreciate any efforts towards this direction and since I believe that software should be independent from hardware issues, there’s still one thing that bugs me about this: in order to use this kind of technology, you’ll need to have a broadband connection. How fast? AT LEAST 128 kbit/s.

Sorry guys, but I think you’ve missed the target. While many users definitely appreciate the Windows desktop, what we – the users around the world who aren’t on broadband – need are secure Windows-styled GUIs that offer the same services but don’t require so much bandwidth.

Maybe something like the already mentioned Jahazi package that comes bundled with portableapps.com on a pre-configured USB stick or LiveCDs such as the (still alpha) ReactOS which is a WinXP clone. Something that just works and doesn’t require any virus scanners, extra firewall software and multiple installations because someone accidentally deleted a Dynamik Link Library (dll) or other horror scenarios any admin fears.

So, what’s the alternative? Simple: get a LiveCD of your favourite OS, plug it in any computer (LiveCD on a USB stick!), restart it (ok, this may not always be possible), load your favourite OS and just start working. Inet access may still be a problem though, but maybe there’s a DHCP server runing somewhere.

I would just like to see more and more ppl using their own (virtual) desktops, stored on their own USB sticks with their own preferences. This of course isn’t the best solution, but it could help having better desktop environments at internet cafés or other places where a single computer is often shared by many users.