There was an article in the local newspaper the other day where the State of Bremen asked its readers to volunteer for today’s election day. I quickly downloaded the application form from the inet and applied for that position as I always wanted to do that kind of work.

Such a one-day job actually includes arriving at the polling station as early as 7.30 am and supporting the election official until all votes are registered, which means you’re home at about 9 pm.

Despite of being interested in that kind of work, I also wanted to see WHO actually lives in this area which had been my interim home during 1983-1990 – and since I had just returned to a familiar place for the first time in my life, a place I am sometimes ready to accept as my “base station”, I thought it would be great to see some familiar faces from the past.
Besides, there’s EUR 30,- incentive at the end of the day, and in my Kenyanesque brainstructures, this equals to around Kshs. 2700/= for a day of just sitting on a desk and making sure that ppl drop their votes. Dude, could I ask for more? Simple! 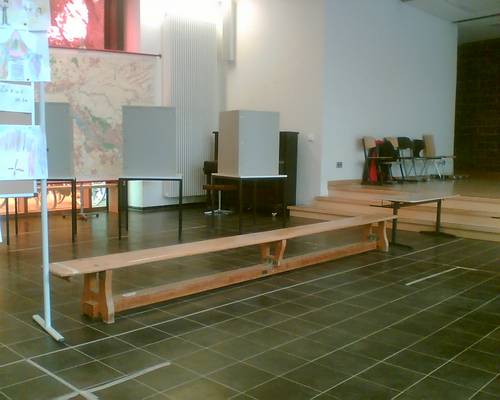 So what’s the difference?

Besides of different procedures (voters get their electoral card sent through normal snail mail and have to deliver either this card or their ID card in order to vote), one thing remains as an amusing fact.

Well, can u see that long bench in the middle of the floor? We used it to divide the room into two areas for each electoral district, but ppl here – for some peculiar reason – apparently saw this as a challenge to change lines a.k.a. districts and consequently line up for another district. They just jumped over the bench as if they were back in school (the building is a primary school).

==> Whereas you’d probably see an askari with a rungu in Kenya, making sure that ppl keep order, there was no order here, just unbelievably “smart” people (~ 5% of them having a PhD) who apparently thought to be smarter than the rest by jumping the line. Idiots.

Needles to mention that the majority of the electorate in this district voted for a very conservative party. I guess this goes to show the actual meaning of permanent head damages (phd). ^^

The problem with many ppl is their inability to think in juristic terms – putting your vote on a piece of paper isn’t voting but instead dropping that vote into a sealed box and getting your name registered as having voted. The consequence of this misunderstanding is that they put every emphasis on marking their cross on that piece of paper, but when it comes to the actual process of registering your vote, many voters today just wondered about this extra hassle.

And yes, it was a nice experience today and I would do it again any other day. It’s a good feeling to be living in a society where ppl actually care about each other, and despite of these somewhat peculiar relicts of German history, I appreciate being part of the system, even if its just for one day.

Of course I just had to close the day with Bremen’s best product: Beck’s Gold! :-)

One thought on “Wahlhelfer, part 2”