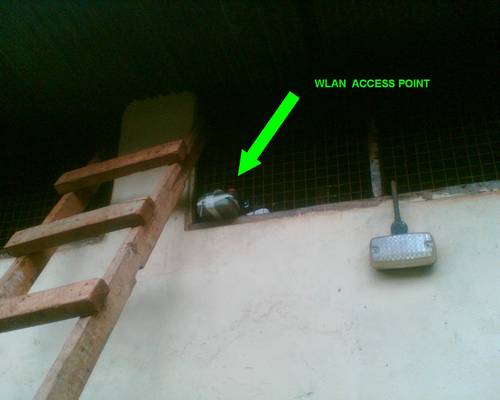 Some time ago, our offices were provided with some nice HP desktop computers as well as an access point for a wireless local area network (WLAN). Except for the usual problems (e.g. ppl transmitting computer viruses (not virii!) via USB flash sticks), the wireless network had been left switched off as the previous setup could only reach 2 or 3 offices.

To give you an idea of what our compound looks like, pls feel free to check out this panorama view:

The access point we are using is a simple D-LINK DWL-2100AP with a small rubber duck antenna that connects via the typical reverse SMA connector. There are in fact external antennas for such accesss points and wireless routers available on the market – even in Nairobi. External antennas come as indoor and outdoor versions. However, these cost between Ksh. 5.000 and 15.000 /= – which of course is a lot money for a simple (repeater) antenna.
I even thought about extending the antenna by using a coaxial cable and the existing antenna or even an additional reverse sma connector (I even thought about building my own antenna using this manual). Yani, the best improvement for any wireless setup (tv, radio, wlan, etc.) is to get a good antenna. Any coaxial cable in between might extenuate the already weak signal, and besides, this is Embu. There’s no 50 Ohm coaxial caboool, neither any reverse sma connector available. And I am just sick of being stopped by unable shopkeppers who don’t even know what they are selling. These gals (!) don’t even have simpoool battely horrdaaass, as mentioned earlier.

I wanted this thing to eventually work. And I didn’t want to spend too much money on this. This is a public service office that survives on donors support, revenue from water permits and salaries through the government @ job groups J & K. 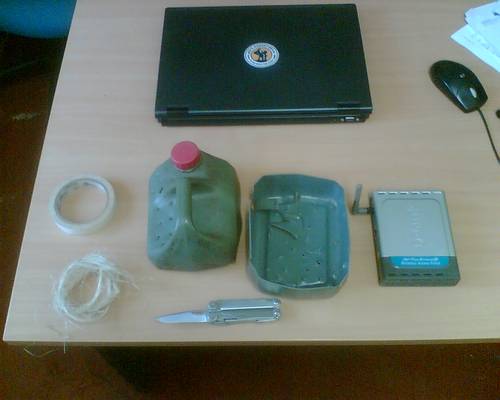 And this is what you’ll need for the outdoor protection of an access point: an old jerrycan rescued from the garbage, some sisal rope, some tape, a sharp knife and, of course, the AP.

I also invested Ksh. 249 /= for a 5m extensiooon cabooool and ….nothing else, actually. These things just do the job. 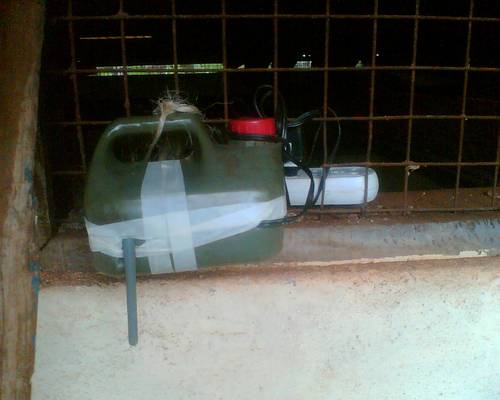 I’ve cut the jerrycan into pieces (just like the salt shaker :-), put the AP inside, connected it to the extended power supply and fixed it to the ventilation windows on this old workshop building (ex provincial water office workshop).

Well, what can I say? It works. It just works. The signal is now strong enough to reach the whole compound, all computers are hooked up, are secured via the typical WLAN security measures and we only spent an additional sum of Ksh. 249 /= which could have been even less by using a simpoool powaaa caboool which sells for Ksh. 45/= /m.

The reason for blogging this is because in the past, I’ve seen a lot of money spent on expensive high-tech whereas simple and cost-effective solutions also do the job. And as long as we’re talking about public funds, the money issue is important, I think.

(funny thing: the wooden ladder as seen in the pictures was made to be heavy so that it doesn’t “walk away” (~ get’s stolen by someone). welcome to the public service! :-)