…aggggrobatics, so here’s my reply:

1. When communicating with other Exilkenyaners, I make frequent use of words like “aterere….., oh? i see…, kweli?, sasa?, aca!, whereby, supposed to, particulaaaar” etc. and automaticarrry adjust my pronouciaaaation in a way that I say simppoooooolll (instead of simple) or prrobarrry (probably).
You got to show peeepooooll where you’ve grown up.

2. I LOVE repairing stuff. The best thing I’ve ever repaired were diving goggles where the rubber broke – and I’d managed to fix it by using some thin fishing line and a cheap needle. As far as I am informed, those goggles are still in use (ama, Mathias?).
I know this is a common habit among other geeks, and I partly blame it on MacGyver & Co…

3. As a geek-growing-up, I used to be very interested in amateur radio and have been a member of The Amateur Radio Society of Kenya (ARSK) and the Deutsche Amateur Radio Club (DARC). I never managed to obtain a licence for a call-sign though as the internet with its various other technological challenges came in between. Maybe later…
The only licence I managed to get was a firearms licence for a simpooool air rifle way back in Kenya from the Firearms Department. I’ve never seen a Kenyan office THAT well organized. Kudos to those guys!

However, I would never again spend money on weapons. Except for my Leatherman Wave, of course :-)

4. The first CD I bought in my life was INXS “Welcome To Wherever You Are“, released in 1993. The first record was a single by OPUS “Life is Life”, sometime in 1986 or so. Ngoma ni maisha! (=> listening to music AND making my own music!)

5. I keep a diary in form of sketchbooks. Something that has been inspired by the late Dan Eldon. After going through various boxes of souvenirs from all the places I’ve been to and nice letters I’ve received in the past, I figured Dan’s way to be the most perfect solution to arrange all this stuff. All virtual stuff that I want to share with the world goes into my blog, the rest into my sketchbooks.

6. I bought this these books in Kenya to scratch Rrrucy’s back polish up my (non-existent) knowledge of the Gikuyu language: 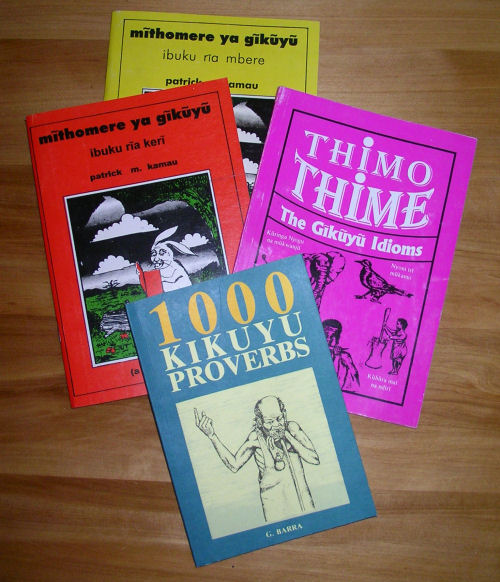 And this one to take me there…. (knowledgii muuiiiuuruuuu)
(~ now you know what the Zungu in Mzungu stands for! :-)

Next victims of the tagging biashara shall be Anja, Cedric, Steve, Adrian, Wambui , Astrid, Carina, Edith, Christoph and Kui! :-)

10 thoughts on “I’ve been tagged by Mental…”