Look what I’ve found in the basement the other day: 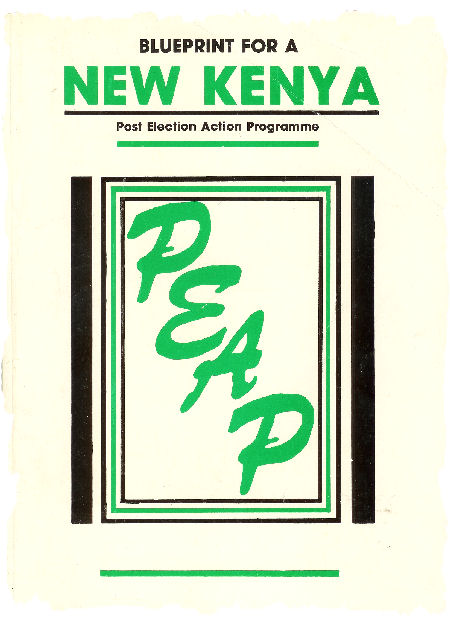 An interesting paper, issued with the help of the Friedrich-Naumann-Foundation in 1992 in Nairobi, which summarizes some interesting facts and data as of 1992 – and on which the former regional director of FNF Kenya got expelled from the country. Sure, a document that played a role in Kenyas democratisation process at some point – and the initial starting point to this blog entry today…

Now, 14 years later, Kenya has experienced a major shift from something I call “the Kartasi era” to “the simu ya mkononi era”.
We’ve witnessed a lot of change, people advancing in so many ways and especially this breakup spirit right after the last elections in 2002 that made a lot of KTs reconsider their own coming home and thus reducing the brain drain.

There was hope that things might change to the better.

With the fall of the Berlin Wall in 1989 – a wall that separated two parts of Germany for more than 28 years – the people in Germany soon realized that next to that hope for a much desired change, they needed to learn how to get along after all those years of separation and ideological distance.
Kenya (I think) experiences a similar fate: mixing the difficult past of colonial rule and a single party system with a new challenge of globalization and internal conflicts. Accepting diversity within the country and using this huge potential to sustain stability.
No one ever assumed this would become an easy task. And no one expects drastic change within a few days.

However, there’s this issue of politicians vs. leaders; business(wo)men vs. civil servants that keeps on coming up:

Be it Kenya or Germany – I think what we need are dedicated leaders that restore faith and hope and make us believe in the system again. Because if not, the world(s) will continue breaking up into little pieces and the only bigger social net we’ll have then is the Internet.

Where and who are those leaders of tomorrow?