Without any proper scientific proof at my hands right now, I would still like to focus your attention to an urgent problem that keeps on arising and needs to be tackled soon: Africa, I think, has become the landfill for the West. And East!

Remember China’s interest in various African countries? Not that they only exploit the continent of natural resources – in return the markets are flooded with cheap products that end up somewhere on a landfill. All these plastic items, be it useful buckets or just toys, eventually end up as rubbish and need to disposed of (one way products). Recycling is an option, yes, yet in most cases it’s a downcycling process (material quality deteriorates) and just a delay on its way to the landfill. In the end it’s still waste.
And of course it isn’t China only. I’ve just watched this youtube video of an NGO that helps schools in Uganda going online. Nice! However, to look at backgrounds – isn’t it that most of those computers are 2nd hand and thus disposed of to countries like Uganda?
Or Kenya: ever wondered why there are so many plastic bags flying around? People grew up with organic products, they were used to goat bones and maize/corncob that would eventually decompose over the years. And with those plastic bags and batteries? No one told them that those items are polluting the environment (ok, except for schools). And no one wants to be responsible. People applauded Dr. Wangari Maathai for winning the nobel peace prize but it seems they never really got the message – which I think is taking fate into your own hands and starting to change something without waiting for others. No wonder Kenyans are more into political discussions than in identifying leadership. Dito Germans, btw, and in many other countries. People, it seems to me, are more into living a pleasant life and securing their amenity values. Business and maximization of profits is valued these days – whereas commendable professions like teaching or serving jobs like in the civil service aren’t really honoured. But I digress… 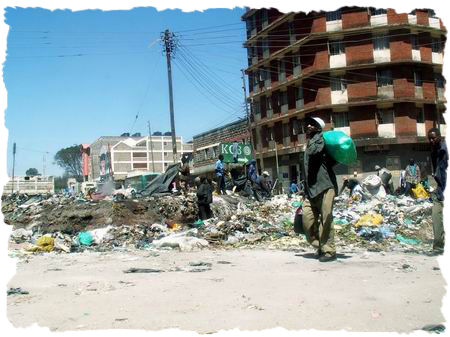 waste on the streets in Nairobi, Kenya // instead of better waste management, wouldn’t it be better to avoid all this waste in the first place by using more intelligent products?

Please don’t get me wrong – capitalism per se isn’t that bad and mandatory for progress. Only, what we’ll need to have are sustainable, eco-effective products that won’t have any negative effect on the environment and that only become better the more we buy/consume/produce. And we’ll need to design them in such a way that we don’t need to depend on the intelligence of people/users.
E.g. if 9 out of 10 people care for the environment and only 1 of them continually ignores all product handling directions by let’s say throwing batteries into a river, all others have to suffer. And since there will ALWAYS be someone violating guidelines (we can not change anyones behaviour), we have to change the products themselves.

I’m not the typical theoretician that tries to lament on problems, writes reports on various subjects and has many different IF/WHEN/THEN-solutions to a problem. What I want is action, and I want it soon.

To make a start, I would like to tell you about this product idea I may have been talking about before and which I choose to blog instead of keeping it in a drawer somewhere. Besides, some companies may already be thinking about it, so anyways, here you go:

While working on this sewage treatment plant some time ago, I came across a huge pile of Q-TIPS® (cotton swabs) in the sewage sludge. The cotton part of them would dissolve in the wastewater whereas the plastic stick in the middle would remain and end on the sludge landfill. Those plastic components also contributed to a lot of mechanical problems on the treatment plant by destroying various pumps and other intergrated machinery.
The first question that arises of course asks for the dumb users that throw cotton swabs (among other things) in their toilets. According to what I’ve encounterded a lot of people do that. Out of sight – out of their mind(s)?
Whatever. You can not change them.

What I CAN do, or try at least, is changing the products they are using. I thought of re-designing those Q-TIPS®/cotton swabs in such a way that the plastic stick will be substituted by a material that is made of (corn) starch, chitosan, plant fibres or other biomaterials. This biological material could then dissolve in the wastewater or decompose on the landfill after use and people could continue throwing their waste into the sewage system without harming the environment that much.

I think some companies are already doing r&d on these products and it will only be a matter of time until customers are informed enough to ask for more and more sustainable products. The different approach, though, is that this shouldn’t be only focused on those that can afford to buy “good” products – the African continent with it’s still traditional and comprehensible view of nature and biological cycles should play a leading role in these (not so new) new technologies and I think it’s about time for more and more companies to start focusing on this instead of just copying various technologies/industries from the West.

This might just be small idea for progress, but at least it’s a start, or? What do you think?

7 thoughts on “a proposal…”