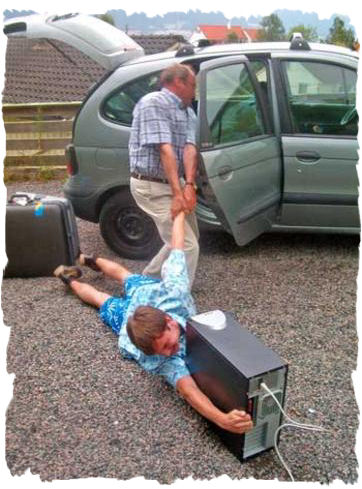 What are the three major issues I have with mobile computing?

Lady Mbuzimoja, this particular friend of mine who has her own notebook but not her own blog ;-), today reminded me of getting my own notebook. I think she said that because she wants me to be a bit more mobile….

Some years ago, when the term "technomad" wasn’t yet defined, I had an Acer 513T notebook (ok, laptop) which helped me get going. Upon settling here, I realized I wouldn’t need it anymore and sold it to another friend. Although I actually enjoy being without a notebook/mp3 player/pda/etc (owning = obligation to use it!) and my Nokia 6230 (mp3!) being enough in terms of mobile devices for the moment, I am often tempted to look out for really kewl gadgetimojas that I should get one day.
On the other hand – didn’t I just mention that there are some issues with mobile computing that irritated me a lot in the past? Hmmm…

1. Let’s pretend an all-area-access to networks is being worked on at the moment – be it Cable, DSL, WLAN, GSM/GPRS, packet radio, etc – all these access technologies are being deployed and since you can already send an sms from the top of Mt. Longonot in Kenya to almost any other GSM network in the world – why worry? In fact, here’s a nice how-to-install guide for your own (rural) wireless network.

2. The networks being deployed and flash/portable memory becoming more and more available, users aren’t forced to keep all their programs and static data on their computer’s HDD. Instead, computers are regarded as workstations only and if they brake, we just exchange them without the loss of any data.
Operating systems like Windows or Ubuntu are pre-installed and the hassle of adjusting this and that is gone. Just switch it on and use it. Who knows? Maybe in a few years time, computers will have fixed OS like PDAs have or our good old homecomputers had in the 1980s.

3. Despite of all sexy advantages a mobile gadget has, I think the quest for consistent and almost infinite power supplies is still the biggest problem. Of course, there will always often be a socket nearby where you can recharge the batteries inside (be it at home, in the train, on safari via solar energy or a local duka that normally recharges mobile phones using an ordinary car battery, etc.) – BUT! – what if we could find a way to recharge the batteries / generate electrical energy the moment we need it? I think that’s still the most interesting part of it. Generating the energy when we need it – thus changing battery design.
Users are human beings and we have lots of kinetic and thermal energy that goes wasted. What if we could find a way to turn that into electrical energy? Imagine, there are even ways of using the heat of waste water to generate energy!
I say: if we can produce energy out of human excreta (not only Biogas!), there sure has to be an intelligent way to propel our mobile gadgets with such alternative energy as well. 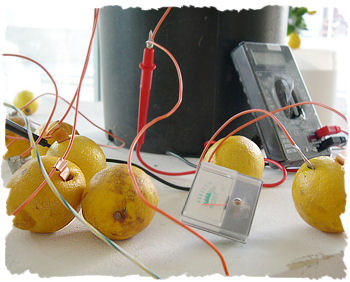 Many of you out there have already been talking about Negroponte’s $100 Laptop for kids and I guess that’s also because of the useful and integrated wind-up mechanism that generates enough power to run this machine without connecting it to any electrical socket. To my mind that’s THE best part of it – despite the aim of introducing the computer world to future generations.
How about if we could have a wind-up handle / dynamo system ready for our current laptops/pdas/mp3 players/mobile phones (thx Bwana Baylis:-) ? I know there are some available already, but the market isn’t really that huge. And this quest for alternative energy resources isn’t just about buying solar panels or fixing dynamos to our gadgets – it’s about getting electrical power instantly – whenever we need it.
I think batteries should only be used as capacitors but not as primary energy resources. However, any interim solution like solar/dynamo is better than being dependent on power sockets.

Meanwhile, Lady Mbuzimoja’s notebook has a dead battery which needs to be replaced. She can’t get that battery in Kenya and instead of going for a sustainable and intelligent power supply, she has to settle with just another Li-On battery.
How come manufacturers are putting so much effort in making all those mobile gadgets more and more powerful while at the same time ignoring to answer questions on sustainable, reliable and intelligent power supply systems?