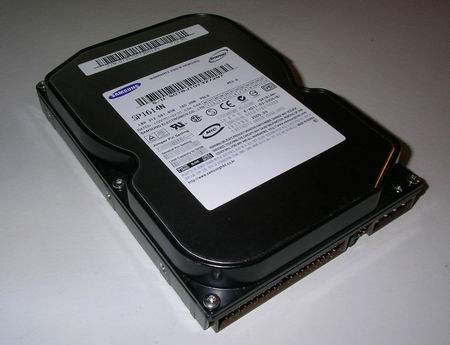 Imagine a hard disk being a piece of land that belongs to a farmer. He has divided it into different partitions called C, D, E, F, G, H, I, J, K, L (~partitioning) and wants to use each of those partitions to grow healthy stuff. Before he can grow anything, he needs to plough the whole plot (~formatting) and then one day he decides to use partition C as the site for his new house (~place of the operating system, i.e. WinXP).

The farmer grows lots of healthy fruits and good vegetable and even installs a big wall surrounding his house (~firewall) and to prevent it from thugs (~virii) entering his home and stealing his two vehicles, a colour tv set and other goods worth hours of hard work.

Then just one day, the impossible happens and the land upon which his house was built, descents into the ground because, as further studies later on revealed, there used to be a lake right under the house which was filled up with soil and so the heavy weight of the house caused everything to sink into the soil… This tragedy left the poor farmer with a huge shamba that he couldn’t care for because his tractor was sunk as well. The remainings of his house were declared unfit for further use and he had to use all his savings to buy another tractor in order to harvest the fruits of his remaining land…

There’s this 160 GB Samsung SP1614N (7200rpm/8 MB cache) hard disk drive (HDD) I bought in April 2005. Yesterday evening I tried to switch on my computer and all it did was telling me that a certain Mr. Samsung had gone on a longer vacation. I tried to persuade, I begged this harddisk to come back to work but all it gave me was an absent note, saying: "ntoskrnl.exe" not found. Yeah. No problem, just pull out WinXP CD, recovery mode, type in >>expand X:/i386/ntoskrnl.ex_ C:<< et voilà…. Et nothing! That damn config directory wasn’t even available! Huuu….. hakuna matata, then I will have to reformat everything. Takes time. Takes even more time.  Stops at 32%. Ah.  Maybe a bad sector. I have to run SPIN RITE 6.0 on it then.  SpinRite ran the whole night and when I woke up again, it still showed the same screen where I had left it when I went to bed. Uhhhh. 32%….34%. Ah. MAYBE I can still try to reformat it and hopefully NTFS (Microsoft’s preferred file system) will exclude any bad sectors. And yes, it actually formatted the drive this time, though it took about 2 hours. I then reinstalled WinXP on it and once the computer started again, the hilarious S.M.A.R.T. function (Self-Monitoring Analysis and Reporting Technology) eventually realized that something could be wrong with this hdd. Yeah, as if I didn’t know…"S.M.A.R.T. status: Bad – backup and restore. Doooooooooooooooooh!

So I "just" bought a new HDD and recovered the data from all the other – functioning – partitions. Fortunately, no important data was lost (backups, folks, backups!). However, it still bugs me a lot that a new HDD just fails to work right after 7 months in use… Those folks over at Samsung are in for a goooooooooood explanation!

P.S.: I think one day, productivity will be measured by the time span it takes to get a system up & running again.