Anyone remembers Binyavanga’s comment on “Nairobi people living in two different worlds?”. It is so true. Again and again.

There was this public reading (organized by the German Cultural Centre (Goethe-Institut) & the German Department @ University of Nairobi) by Ilija Trojanow and Binyavanga Wainaina at the Goethe Auditorium (@ Maendeleo ya Wanawake House – used to be one of Nairobi’s tallest buildings in the 1970s!) on Thursday evening. They jointly read passages in German and English from a new book by Ilija Trojanow about Sir Richard Francis Burton, a “Mecca pilgrim and world traveller” (btw, Burton also introduced the first edition/translation of the Indian Kamasutra books to the UK among other stories). Ilija wrote a biographical novel aptly titled “Der Weltensammler” (The Collector of Worlds) on R.F.Burton – a man who was just as mysterious and sort of multicultural cosmopolitan as the author himself. Someone who kept track of his Wanderlust and never really stuck to a place. But whereas Burton’s wife eventually burned all his diaries, Trojanow has been an active publisher and promoter of books. I like Ilija’s picturesque style of describing situations, and how he manages to combine all these different worlds under one roof by using different characters / perspectives in his book.

I had read about this event in the Daily Nation on Tuesday and instantly knew it would be a perfect chance to meet some old friends at the GI. Ilija used to be a student @ the German School in Nairobi way back in the 1970s/80s and has since then often returned to the country. He’s a third culture kid like most of us out here in the blogosphere (all Nairobians are to some extent, ama?) and seems to have an understanding of the culture in the colonial East Africa and how to describe it in his book through the eyes of Burton. An interesting story.

I think it is against this background that made him write a novel on such a controversial character Burton was. And of course the Arab + East African connection: Trojanow recently  accepted (not: converted to!) the Islam as his religion because parts of his family already share that believe (and for other, much more intimate reasons which he disclosed in other interviews online. Reasons that make me understand this rather unusual, but very motivated move) . Burton disguised as a Muslim pilger in order to go on a pilgrimage to Mecca (he even received a circumcision to fully prepare for the pilgrimage!) – something Trojanow also achieved (~ getting a visa for Saudi Arabia) by living with the Deobandi in India for some time. 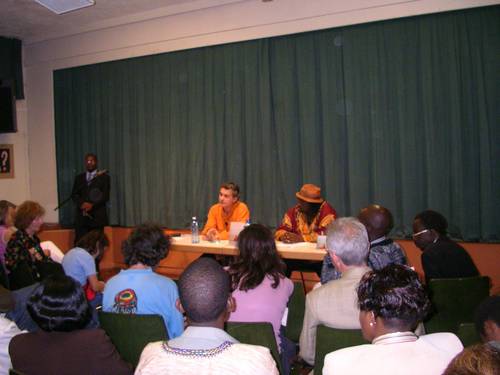 Binyavanga and Ilija are two very different characters who – in my opinion – have come around and have an understanding for the cosmopolitan context (both lived in SA, btw). An ability which is needed to describe situations – I guess you have to be some sort of collector to aggregate impressions/worlds and imagine them in your head before you can put them down in words. After all, it’s just not the beauty of the language that attracts people to read, but the way these worlds are combined / arranged and described using appropriate words. Both authors know how to do this – and have found their readers here and elsewhere.

Talking of B.Wainaina – Kwani? #4 will be out soon and hopefully available for the christmas market. All KenyanTourists (KTs) abroad should seriously think about getting their copy this time. Kwani #1,#2 & #3 have already been a success story and received with great interest by the public. Obviously, I couldn’t resist from asking both authors about a possible future cooperation, and the idea isn’t so far fetched…Kwani isn’t Wainaina’s only project – he told us about his 2nd (own) book which needs to be finished soon. Good luck!

Going to such events also includes meeting new people…new worlds…new stories. There’s this jamaa by the name of Bernhard we met tonight who came all the way from Germany to Kenya to do an internship at Kenyatta Hospital in Nairobi. Free of charge! Ok, there’s a scholarship that pays for his expenses, but nevertheless – most of you can easily imagine what it takes to work at Kenyatta Hospital. Bernhard told me that he also blogs his experiences. In any case: respect, bro!