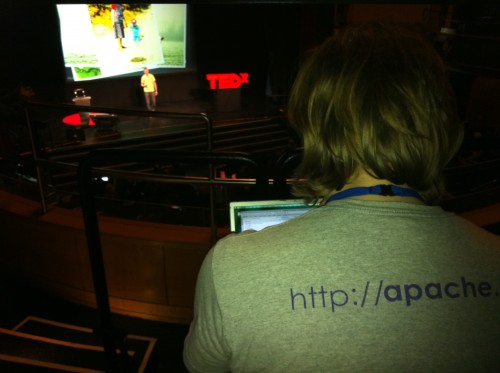 An unrelated, but still epic snapshot I took at a recent local TEDx event.

Coming back to my satirical he-said-she-said piece on Pirate Party Kenya, I think there’s 80% truth in it and that Kenya could also use such a modern political party. And this although I also believe that democracy as such still isn’t the best option for today’s Kenya, at least not when it comes to the way it has been implemented in the past and when we look at the historical structure of societies in East Africa.

I am not a member of the Pirate Party Germany because I am trying to be independent and have in the past also contributed to Germany’s first hyperlocal project frankfurt-gestalten.de (which is similar to Mzalendo.com, but for (the City of) Frankfurt am Main only and is more about republishing open data (e.g. hansards from the local parliament) and capturing citizen voices) and have as such tried to keep a neutral position.

I have, however, voted for Pirate Party during the last two local (German) elections because of the following reason(s).

I also voted for them because I am convinced of their concept. You’ll have to understand that about 95% of the German media are currently trying to brand us floating voters as “protest voters“, who voted for the Pirate Party out of protest. This is SO wrong and I am strongly opposed to this limited point of view! The problem is: most of the media didn’t get it. As much as they never understood the need to update their views on the law which regulates the use of (online) content. What’s a free and open media when they are too stupid to understand a completely different approach to politics? A new approach that also requires a different benchmarking system if we are to compare the new option with the traditional alternatives. And please remember: Germany already saw the introduction of the Greens Party (“Die Grünen”) in the early 1980s, so our society here is already familiar with new approaches.

I am calling the Pirate movement a modern party because I strongly believe that their structure is the logical consequence of what the internet has brought us so far. Such as an international and timely response on open issues that have in the past only been dealt with by a relatively small group. I see it as a response to the success of the internet – this world wide network that is as revolutionary as letterpress, radio and television combined. The understanding of the impact the internet has on all of us probably is something that many of the critics do not really want to acknowledge. As such, with new structures that introduced a completely new concept in communication, it’s also about time for a new and different system. Either way, it just happens, whether you like it or not. I also don’t like everything they put on Wikipedia, yet I often use it like many others.

What makes Pirates Party special to me is the integration of modern tools and a completely different understanding of grassroots democracy – something we already know from the internet. “Liquid feedback” is such a system and piece of software that collects voices and forwards votes to a person in the system that has more competence on a particular subject. Everyone can cast his vote on all issues or delegate his vote to someone else. It’s still a relatively new approach, but the one that makes the difference to me.  This alone – the different understanding of TRUE democracy – is reason enough for me to give them my vote.

It is also this understanding why I just laugh at critics who are asking me on “how can you vote for the Pirates – they don’t even have a political agenda next to their internet stuff??! 1!11”. Most critics just repeat what they read somewhere.

And the Pirate name? Well, both in Kenya and Germany, many if not all political parties seem to have names that don’t hold true to 95% of their daily business. Maybe the Anarchist Pogo Party of Germany (founded in 1981 by two punks) is one of the few that is as consequent in their approaches as the name dictates.  So either way you may want to interpret the name and how it qualifies for a better marketing strategy (given that it sounds a bit anarchic to most conservative voters), it probably only matters for marketing reasons and as such, it isn’t the worst.

In a recent election in two different states within Germany, the German Piratenpartei scored between 7 and almost 9%, thereby securing a few seats in local parliaments. They currently have over 23.000 (!) members in Germany, which is quite a lot for such a young party. Something tells me that a) they are doing it right, b) the interest to engage in local politics isn’t dead and as important as it has always been and c) not all of their members are the stereotypical IT folks with long hair who are into Terry Pratchett and/or have a paranoid fear of everything Google Inc. does. All these members, rich and poor, old and young certainly aren’t engaging for the protest only.

It is for these reasons alone, but also for many unmentioned more that I would to see politics adopting more structures that correspond to the technological framework we currently experience on our planet. New structures that enable crowdsourced project approaches, something that will hopefully also change the way we perceive to live in urban communities (e.g. a modernized infrastructure that plays along with our needs, not the other way round as it has been in the past). Pirate Party as such may not be the best option with all its typical start-up problems, but it’s the one that works and that’s all that matters to me at the moment. If we could have the same in Kenya, I’d be very happy!