…and I will update this entry once I’ve figured out what to write for my new side project:

Update: Hello World! …seriously, there’s nothing much to add. I really hope to move any future content on sanitation on this external blog and will also try to attract other authors on that site. You know, I am also active on a mailing list which deals with ecological sanitation – and many of the participants are scientist. Which is why most conversations are only related to scientific matters. Interesting, yes, but still a closed group. Who would want to talk about sanitation all day long? People talk about IT on lists like Skunkworks KE, because computers are interesting. And this although they are somewhat expensive and often just a beautiful waste of time :-). And sanitation? Everyone has to go to toilet – but just so few talk about >toilets< in general. Did you know there are over 950 results when you do a Flickr groups search on “toilet”?

So, obviously, there’s a place for this – and the internet being an ideal place for conversations, why not lifting this stigmatized niche to a better platform through the use of modern conversation tools such as blogs? Sanitation to me isn’t only about providing basic toilet facilities to some developing countries (sic!), but a matter that everyone will pay attention to on an almost daily basis.Â Flush toilets, based on water to flush away (transport) the faeces & urine into a sewage system, aren’t that ideal. 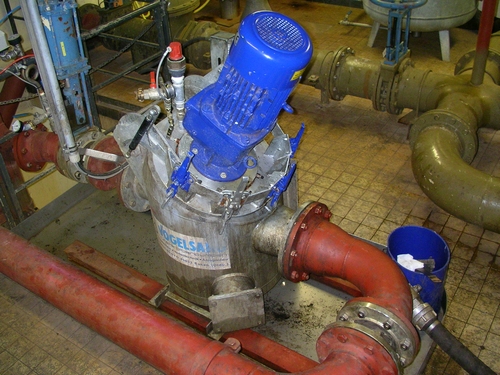 my favourite machine on the plant: a grinder pump that chops up all bigger pieces like Q-Tips, tampons, condom, hair and other stuff ppl keep on disposing through the toilet system. I used to clean this on a daily basis… (i was told the second day that gloves are available :-)

I’ve worked on a sewage treatment plant, put my hands where others wouldn’t even want to enter the room and quickly realized that this basic issue of proper sanitation does not necessarily depend on the smartest technical solution used (there’s no “one-fits-all”-solution), but instead only depends on what people want to use when relieving themselves. Sanitation is dignity. Not a slogan, but reality.

If saniblog.org helps to elevate the matter of sanitation from a closed group of scientists and their cryptic conversations onto a normal level where this matter could raise more attention – heyyyy – that would be awesome!

Markets are conversations. And sanitation is a huuuuuuge market!