Among all the many smart ideas the N95 comes with, a rather unimportant little application caught my attention: the mobile code reader .
And according to Nokia’s BetaLabs, mobile codes are supposed to be “encoded, exposed and discovered”. This Symbian S60freak (the operating system on which this phone’s firmware is based) actually gives us a 10-point manifesto on why Barcode will rule the world (one day).

So I gave it a try and came up with a short but still meaningful phrase that I encoded, printed on paper and cut in small pieces. After a loooong day in the office, decorating the environment with secret messages for those Amélie-characters out there who still have an interest for the small things surrounding us, especially in urban areas, is just a perfect little amusement. 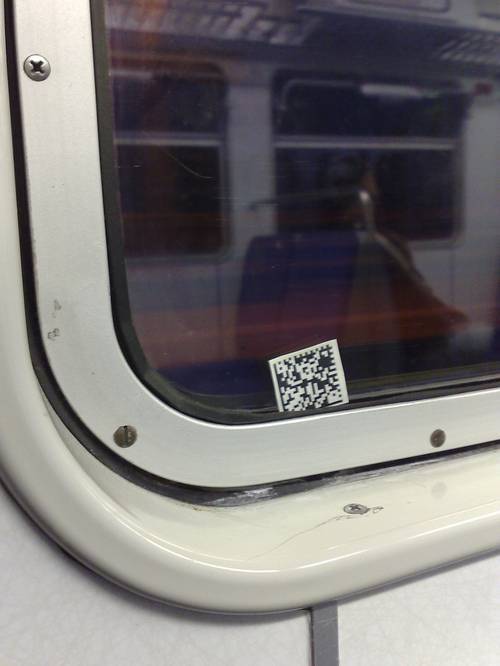 I wonder if anyone manages to decode this. :-)

The-Oh-I-Forgot-To-Mention-This-Last-Night-Update:
This of course doesn’t only work with the N95 – yani this time around Nokia decided to implement it into the standard software package that comes shipped with you N93 or N95. There are a few free barcode readers available on the net and the best reader seems to be the Kaywa Reader, which is already compatible with selected Motorola, Nokia, Samsung and SonyEricsson phones. If there’s a GPRS or 3G conection available on your phone (~ if you can access a website through your phone), make sure to type in the http://reader.kaywa.com/ address and select a phone (or one which seems to be similar) to download a copy of the reader.

Oh, and while I am already at it anyways: a Nokia is a Nokia, and this N95 with its silver frame strongly reminds me of the year 1999 (2000) when the Nokia 7110 came out. Somehow strikes me that both phones are riding on the same wave in terms of a) a similar slider mechanism, b) similar haptics (~ the silver frame surrounding the screen) and c) a way too narrow and small keypad that doesn’t provide enough space for the user’s thumb.

And while going through that list of supported phones, I just can’t hide the feeling that some SonyEricsson phones are actually way much better than Nokias. Except for the keypad of course. In one of those typical comparisons, Nokia phones are like buying a VW Passat, while a SonyEricsson is like getting a Toyota Avensis. Lots of extras with the latter – you normally have to pay for extra (hence the name) with a Passat. Maybe one day I should try those SonyEricsson phones. Only maybe.