A small round-up of thoughts that have been coming up during my recent visit to Bavaria where I’ve tried to fix Mbuzimoja’s laptop. Problem was that she had left the recovery cds in EAK and now try to imagine how difficult it can be to install an OS like WinXP on a laptop with all these small driver issues like missing USB (!) support and even service packs not bringing the required change. Alternative OS like (K)Ubuntu or Knoppix weren’t an option, but in the end, it all worked out and in terms of IT-related convenience, I can now safely send her back home.

1. Been mentioning this issue before, but securing intellectual property and the amount of time and energy it requires to get a product on the market over here in Germany is just horrible. There’s this good friend of mine who recently moved to Taiwan for good – yet alone for this reason of "getting things done", e.g. to develop ideas and to get them out as ready-to-buy products. I might consult him over an idea I had.
I think this barrier is one of the reasons why some great product ideas are still sleeping in drawers somewhere and not yet marketed. Stupid! I only hope that some wise chinese engineers are already checking out websites like shouldexist.org for useful input… 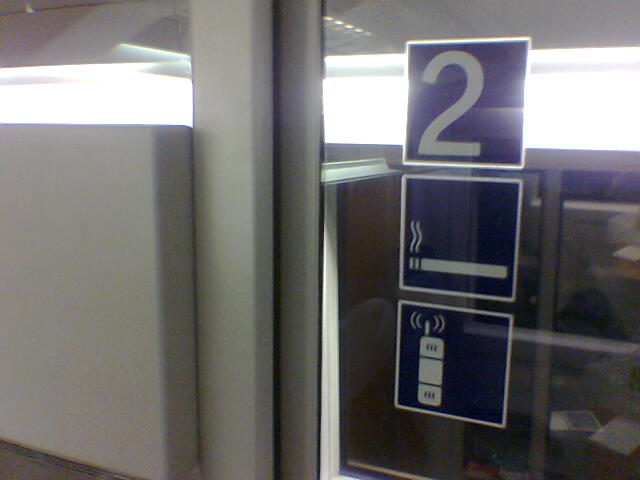 2. The West is so modularized. It seems we’re living in a world of pictograms that indirectly give us instructions on what we’re allowed to do. The matrix, this special frame society has put on itself can be seen everywhere and without these small, but yet elementary guidelines, chaos and anarchy would rule. True?
I shot this pic on the train last night and wondered how passengers would react if someone just comes and applies some totally irrelevant and moronic stickers instead. Would they be left flabbergasted or are they already used to this frame so that they would sort out things for themselves? And could you imagine ppl in Nairobi slums like Kibera to put up sign post with pictograms to organize e.g. water and sanitation issues? Would they need it? And would there be anyone feeling responsible for it?

3. Is there any place (on the inet) where we can find templates or images of the old BlueBand Logo? As Msanii_XL mentioned earlier in the comments section, this would really make up for a stylish Jamhuriwear. I need to get this on a t-shirt!

4. I will need to work on the spam-filters of my mailboxes. 244 emails on my uhuru.de account out of which only ~10% were private emails is just too much for five days…

5. Kudos to The Mathare Youth Sports Association (MYSA) whose website I’ve only recently discovered via an article in a Deutsche Bahn magazine. What an interesting project!
On the other hand, it seems, Kenya is only interesting to them once the stories cover the following subjects: a)slums/hunger/drought/aids/etc., b) tourism and c) kenyan athletes. Please, there’s much more news from Kenya that could be interesting for the rest of the world.
Meanwhile, Riemer-san has send me this picture (thx!!) of a proud Philip Boit as shown in a german newspaper the other day:

6. Had the chance to eventually see "Darwin’s Nightmare" and "The Constant Gardener" over the weekend. The Constant Gardener….well….nice camera work (~City of God-style) and good to see hear they used some nice Ayub Ogada tunes on the soundtrack (and not only once!). Sawa! 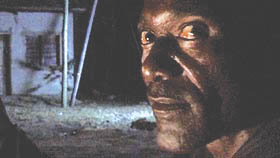 As for Hubert Saupert‘s "Darwin’s Nightmare" (review), the portrait of this man, an askari/watchman on a fish-reeeesaaaaach (research) compound, left me completly astonished. Yet alone for the constant mentioning of this man (with his extreme facial expression most prolly due to HIV related diseases), I think Saupert deserves an extra prize.
This man has left a lasting impression on me and you just have to see for yourself how he speaks – closing one eye, turning the head to the side and putting on this serious Bwana Bunduki (C.I.D.) expression on his face. A picture of a man that has seen everything, and although he praises war activities as a way to bring prosperity and economic stability to the region, you would like to hug him for just being as unique as he is. Saupert, I think, felt similar and resourcefully used this man’s explanations to avoid any direct voice-over(ing).
This documentary contains so many small details that already speak for themselves and those who feel the silent moments and stills the camera catches also don’t need any further explanations.
What a great piece of documentary which clearly deserves 10+ out of 10 points!

7. Trigon-Film, this swiss-based independent film foundation which also provided me with Sarasin’s documentary on Boubacar Traoré last year, mentioned the release of "Congo River – Beyond Darkness" in their newsletter. I will need to get my hands on a copy soon! Interesting to note that they’ve used Lokua Kanza as the soundtrack music – an artist who has only recently been touring the continent and even performed at the French Cultural Centre in Nairobi.

8 thoughts on “back from hiatus”