What’s the difference between hardware manufacturers and hardware buyers?
The latter ones aren’t getting paid for having good ideas and will be shocked by the amount of time and energy it takes to get things into production. So what else can you do if you want to see good imagineering? Buy an Apple MacBook (the magnetic power cord – brilliant idea!), watch old MacGyver and/or blog about it…

When I received my new notebook, I found this plastic film/foil in between the keyboard and the display to protect the display from any scratches. Hmm….there are many many notebooks out there that have display problems – unless it’s a ThinkPad, there will almost always be some space left in between the display and the keyboard when you close it. Space where dust and other unwanted objects enter. Stuff that ruins your display in the long run. So, what to do against it? 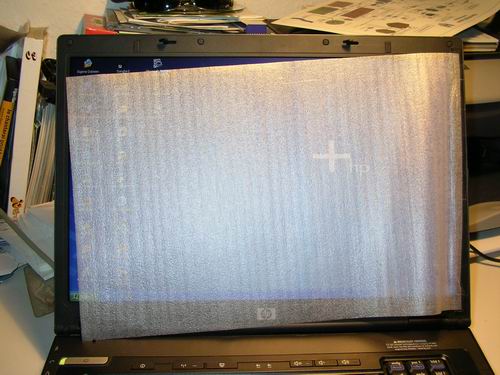 I just taped the foil on one side of the screen so that it doesn’t get lost and can be removed while in use, but is back in place when the machine is closed. Now, this solution looks pretty much jua kali and just serves to illustrate the function of such a protective foil. I would like to have such an extra cover for the screen that protects it while the machine isn’t in use, and is invisible when it’s on. The solution?

A “pull-up curtain”, as I call it. Some sort of small jalousie / blind that rolls up INSIDE and at the side of the display frame, and can be pulled out either from the side or top of the frame to protect the screen. Attachment could either be done by Velcro® or maybe a very thin magnetic piece of metal. Obviously, the magnetic cover should be located away from the hdd.

What do you think – would it be possible to create something like that? (=> I urgently *need* to get my hands on an empty display frame to try this out :-)

Talking about portable computers – compared to performance improvements, there hasn’t been as much improvements on the notebook designs and making them even more transportable. Cool ideas and well designed gimmicks are hard to find or limited to special machines (=> e.g. Apple MacBook). Why?

a.k.a. Installing WinXP according to HP’s logic…

Now, for those of us who have more specific needs and for example don’t keep the (dynamic) user files on the same partition, there are of course ways to partition the HDD and put those files that need to stay on the HDD for longer onto one of them. Just imagine this scenario where you would keep the needed drivers, applications and your own personal files (text, music, video, etc.) and settings on a different partition which is save and wouldn’t be affected once you’d have to reinstall Windows. And those of us who are forced to use this OS (~ the majority), know about the need to frequently reinstall Windows. I think the average user does that at least every year unless you never use your machine and/or never install any new software (of course, those who just want to have a stable system have their small selected choice of programms they are using and otherwise never change a running system).

Now, WinXP normally provides us with a menue where you can choose the partition and settings for a new installation. Not so with the recovery DVD! No menue during the Windows installation routine where you could select the partitioning process and then scale the HDD down to your desired choices. Is this the OEM Version that I bought? I DON’T WANT A SINGLE PARTITION.

And there are of course ways to single-out the installation files of the provided recovery DVD and e.g. make a small Isobuilder CD which only contains the WinXP installation files without any HP add-ons. But it should be easier than that….

So I wrote to HP, asking for a workaround and you know what they replied?

A partition is a logical section of a hard disk on which Windows can write data. Every hard disk must be partitioned before it can be used. Often, a hard disk is set up as one big partition, but you can divide a hard disk into multiple partitions. When you partition a hard disk, you decide how much space to allocate to each partition.

Please install the Operating System using the CD shipped along with the Notebook. Please perform the steps provided in the below web link:

Note: HP does not support more than One partition. (<= the vital information I needed to get)

=> Exactly: a copy & paste answer that explains what partitioning is all about…..HELLO? Hewlett-Packard? WTF is wrong with your customer service? Aren’t you human beings with a brain? Are you located in the USA where the typical user is assumed to be as stupid as the president of this great nation?
I gave you a very detailed question that would point out that you are not dealing with the average Joe User, but someone who KNOWS what partitioning is all about and needs an answer instead of basic knowledge that I could even google.
The provided DVD indirectly supports more than one partition because – and this is the solution to my problem – I initially thought that it sort of overwrites the HDD with an image file (~think of Northon Ghost images) without asking for partitions. But what it does instead is that it just runs this simple script in the beginning of the installation which formats the first partition on the drive. Bingo!

Now, all we need to do is use another programme (freeware tools, Partition Magic, another Windows version, Knoppix, Ubuntu, etc.) which just partitions the HDD. After the HDD is partitioned, the recovery DVD only concentrates on the first partition (=> yes, it does not support more than one partition, but it also ignores all other partitions – which is exactly what I wanted) and installs HP’s castrated OEM version of WinXP Pro.

I really wonder WHY they change these WinXP installation routines – I think it would be wiser to leave it the way it normally comes with WinXP then additionally explain partitioning procedures to the average user. After all, there are so many other unimportant details they are explaining and that don’t differ on most computers and lots of papers/manuals that come along with the notebooks. And while I agree that most problems are just software related and which btw explains why MS introduced this “Windows compatibility” programme with hardware driver tests etc., the manufacturers like HP should just concentrate on the hardware and explain it in full detail. If you open the manual, there’s about half of the explanations about “using software” instead of simple pictures that explain how to e.g. remove the MultiBay, how to upgrade memory, how to save battery runtime (by removing the battery as long as it has an external power supply) and/or how identify hardware issues and enable customers to deliver a detailed error report. I think they could greatly save on customer service if customers were given more detailed informations on how to solve hardware problems on their own (and yes, they DO have a dissassembly manual for download online).

But instead, what HP did was referring me to the MS-knowledge base which just provides answers for a normal WinXP installation, not for HP’s limited WinXP version….